Why I Hate Superheroes 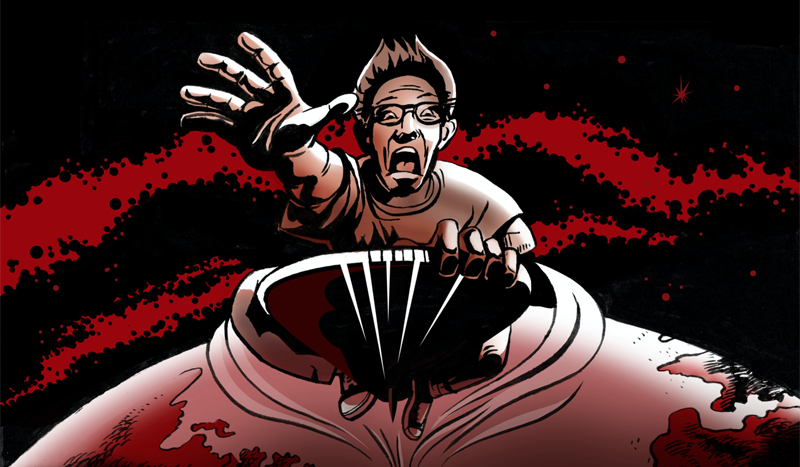 At the risk of offending every fanboy and girl on the planet, I have to get this off my chest.

Superheroes; they’re pop culture. Comics aren’t. Fitting all of comics into the realm of pop culture is like suggesting all books can be classified as pop culture or all music is an expression of pop culture. Let me ask you, why do we understand that, in the context of books or music, only certain portions of it can be categorized as pop culture, but comics—they are ALL under that category? The answer, because all most people know about comics is superheroes; adolescent male-centric, predominantly white, escapist entertainment. And this really gets to my point about kind of hating on superheroes. They have become so synonymous in American culture with comics that they have prevented large swaths of the population from finding out about the other stuff. They simply don’t know about it. I can’t tell you how many times I’ve mentioned that I read comics and heard the immediate reply, “I’m not into Batman and Superman. Superheroes don’t interest me.” or “I loved the new Avengers movie.” Ugh.

Look, like everyone else, I loved the X-men and Avengers and Batman. I loved Stan Lee and Jack Kirby, Steve Ditko, Neal Adams, John Byrne and on and on. They provided an escape from bullying classmates and my mundane blue-collar existence in a dreary suburb of Cleveland. These characters became my friends in a sense; they exhibited the qualities I wanted in a friend: strong, dependable, determined, well-meaning… and they triumphed over the bad guys. That last one was probably more important than I realized. As a child, it reaffirmed my sense of right and wrong, justice and fairness. It also stimulated my sense of fantasy. Climbing walls, shooting webs, flying…winning. What kid doesn’t want to experience that?

I mean, I grew up on this stuff:

And then, I grew up.

I certainly didn’t lose my love of comics. They are still a wonderful medium for telling any story you can think of. And, I think it’s fair to say that Superhero comics aren’t for everyone. Most people just aren’t entertained by that genre of fantasy. Fortunately, and truthfully, it’s not THAT hard to find comics outside the realm of superheroes. Art Spiegelman, Chris Ware, Allison Bechdel,  Adrian Tomine, Marjane Satrapi, Harvey Pekar, the Hernandez brothers, to name several authors who produce non-superhero stuff. SO, why are superheroes so outrageously popular while other genres struggle to find their niche? Let me offer these explanations.

When comics became censored by the comics code in the 1950s, it limited the kind of subject matter that a comic artist/publisher could tackle. The notion of protecting young minds put shackles on their creators and a big portion of the readership was lost. Before the comics code, there was a much more diverse offering, read by a more diverse audience. Romance comics, westerns, crime comics, war comics, illustrated classics, humor, horror…you name it, read by GIs Housewives, young girls, businessmen, everyone;  just like the reading audience of the newspaper’s comics page, which was the point of origin for comics. And then the comics code stripped much of it away. Comics became a product exclusively for children. For the next 30 years, readership dwindled from millions to tens of thousands to today where a book that sells 2500 copies is considered a success. The notion of comics as a product for kids had time to solidify.  Then, in the ‘80s as comic code restrictions began to loosen, creators were able to stretch out thematically and in terms of character development. So the content was allowed to age with the reader to some extent. The characters were still grown men an women in tights, doing insane, fantastic things but at least they were less two dimensional. This gave us an adult audience that still cares about superheroes and can still enjoy them. But it cemented in popular culture that comics=superheroes. Kind of a shame.

The advances in CGI and effects technology have allowed Hollywood to create live versions of these characters that do a good job of suspending our disbelief. They remind us of the characters we grew up with and make them even more real for us. When I’ve watched them, I become quickly aware of how hard the writers have worked to recapture that sense of nostalgia in all superhero comics fans. If you weren’t a superhero comics reader growing up (the majority of the audience) it doesn’t matter; you’re still seeing something new-ish with a subjectively interesting plot and lots of whizz-bang effects. Once again, as an unfortunate side-effect, these films drive home the notion that this is what a comic book is. This and nothing else. These two industries, Movies, and comics have fed off of each other in the last several years. Comics have picked up where the movies leave off, developing plot holes in the movies just as Hollywood looks to comics of the past to provide its next blockbuster characters.

As a popular commodity with decades of brand recognition, the owners of Spiderman, Batman, etc. have made billions on these characters and they continue to do so. There’s no motivation to end their story, and they just continue to build their fan-base.  After a few years of reading them regularly, for me, the superhero books fell into predictable patterns of a story arc. How many times can an adult read about how Daredevil/Matt Murdock suffers brutal attacks from the kingpin, loses his mind but then scrapes his way back from the brink of insanity, ultimately finding the will to persevere and defeat evil? How many ways can mutants be used as a metaphor for inequality, prejudice, and discrimination? It’s simplistic. It’s banal. It lack’s depth by design. Sure characters now die all the time. But the understanding that they will become resurrected after a period of time has become just another cliche and any finality or relevance or meaning connected with death has been removed.

For most readers, myself included, superhero comics bring back fond memories of a simpler time. They transport us to the first time we experienced these stories in the same way that music transports us, and that’s a powerful drug. The art, which is often masterful, can still induce excitement. I think it’s sad, however, if we never get to experience more than that. Sure, everyone needs to escape once in a while but it’s like never getting to know what lasagna tastes like because you only eat Big Macs. My tastes have certainly evolved. I imagine that’s the case for anyone; assuming they know where to look. That’s really all I’m saying here. “Look over here! Hey, look at this!” You might be pleasantly surprised.

So that’s it. The truth is, no, I don’t hate superheroes. I hate how they’ve been associated with comics to the exclusion of everything else. The truth is they’re not just for kids, they’re not all fantasy stories, they’re not just for white, straight, males, and they most definitely are not just about superheroes. In that spirit I’d like to suggest several comics outside the realm of superheroes that were masterful, inspiring, powerful, engrossing as well as intensely entertaining, You may have heard of some of these. You might not. I’d urge you to check them out. And tell your non-comic reading friends!!! Most of them are in your local library if you don’t want to risk purchasing them. If you end up liking one or more, you can search the internet for more comics like the following. Look at Uncivilized Books, Tinto Press, Koyama Press, Ad House Books, Silver Sprocket, Fantagraphics, and Drawn & Quarterly just to get started.

I welcome any and all rebuttals, comments, or corrections.

My Friend Dahmer by Derf (biography)